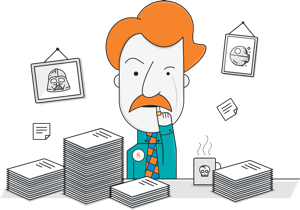 The Used Car Salesman approach to mapping is the most simplistic, and often acts as a fallback position from the Consulting Army approach. It is based on a “best guess” at what the mapping might be.

When we were at the RSA 2017 conference in San Francisco, we encountered several organizations that provided “mappings” of one Citation to another. When we asked how they achieved the mapping, each said “we hired good people, gave them training, and they just did the work.” When pressed about how they did the work, the answer was always the same “they used their best judgment;” or “Trust me, I’m a pro at this” and nothing more.

The same can be said for the people who do a lot of the work for the government. Take, for example, the very first of the mismatched mappings in the NIST Framework for Improving Critical Infrastructure Cybersecurity. What you’ll get from folks like this is a spreadsheet of crosswalked Citations wherein you’ll see the full Citation from the base source, but only the references from the mapped sources, such as from the NIST document shown here.

It looks reasonable on the surface. You can probably guess that the three Citations that “match” are about creating a hardware inventory. The problem is, the people who created these “matches” really just read the documents and took a wild guess that they matched.

They didn’t really apply a scientific approach to the mapping, nor did they present any evidence that they did their work. They give us their answer and expect us to trust them based on their degrees, certifications, and who they work for. The problem is, only one of those combinations match.

Once you see the comparison Citation text of all four Citations, you’ll understand why only one of the pairs match. Below is the same table, but this time we’ve added each of the Citations so that you can really compare them.

Let’s break each of these four Citations down into their basic noun and verb pairs. We will bracket the nouns with straight brackets “[ ]” and bracket and italicize the verbs with curly brackets “{ }”.

The NIST ID.AM-1 Citation has two mandates. One is to make a comprehensive complete list of physical devices and systems. The other is to record that complete list of devices into a report.

Now let’s look at the first of the ISO Citations. The Citation asks us to identify the assets.

Do these match? Let’s see. We can reasonably say that a physical device is a type of asset and identifying something is a part of the activity of inventorying. So, yes, they match. Great! They’ve built a bit of trust!

But what about the other ones? Not so much. Once we start looking past the first Citation pairing we see that there is some guessing going on. Let’s look at the second ISO reference as well as the NIST 800-53 reference.

The ISO reference A.8.1.2 does share the noun "assets" with the NIST ID.AM-1 document. However, the verb that it calls for is owning the assets that are in the inventory. This isn’t about identifying assets or about entering their information into a record – it is about the ownership of the assets.

Guessing at a Citation to Citation match just doesn’t work. These folks hide their guesswork by not showing you the text of the Citations they are mapping. They don’t show you which nouns and verbs they guessed should match each other. And then, they ask you to “trust their judgment” and “trust their work”.

How much would you trust someone who showed you three examples where only one was a match?